Tamasha was formed in 1989 by director Kristine Landon-Smith and actor / playwright Sudha Bhuchar with a mission to bring contemporary work of South Asian influence to the British stage. 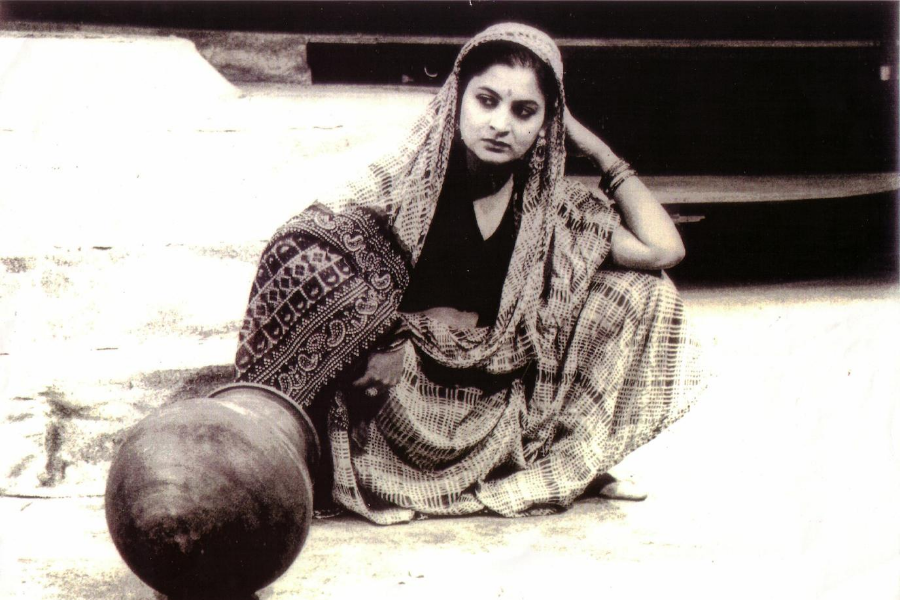 The company’s debut production, UNTOUCHABLE – an adaptation of the novel by Mulk Raj Anand following a day in the life of an Indian latrine cleaner – opened at London’s Riverside Studios in December 1989, performed by an entirely British Asian cast and playing alternate nights in English and Hindi.  The success of Untouchable, and the diverse audiences it attracted, confirmed a growing appetite in Britain for quality drama which could accurately reflect the complexities of Asian cultures, while speaking to theatregoers from all backgrounds.

The company’s second production, HOUSE OF THE SUN, again drew its inspiration from modern literature (in this case a novel by Meira Chand), and provided a window into India’s little-known Hindu Sindhi community.  Ruth Carter’s WOMEN OF THE DUST followed a year later, commissioned by Oxfam to mark its 50th anniversary, recounting the untold story of all-female workforces drafted in from India’s villages to work on urban construction sites.  Both productions saw the team visit India to talk directly to the communities in question – primary research, which has since become a cornerstone of Tamasha’s creative process.  Women of the Dust also performed in Delhi and Bombay, marking the company’s first international tour.

Abhijat Joshi’s A SHAFT OF SUNLIGHT and Ruth Carter’s A YEARNING would follow in 1994 and 1995 respectively, the latter transposing Lorca’s Yerma to Birmingham’s Punjabi community.  It was among five Tamasha productions that were subsequently adapted for broadcast on BBC Radio 4: the radio versions of both A Yearning and Women of the Dust went on to win CRE Race in the Media awards.

Zohra Segal in A YEARNING

Abhijat Joshi’s A SHAFT OF SUNLIGHT and Ruth Carter’s A YEARNING would follow in 1994 and 1995 respectively, the latter transposing Lorca’s Yerma to Birmingham’s Punjabi community.  It was among five Tamasha productions that were subsequently adapted for broadcast on BBC Radio 4: the radio versions of both A Yearning and Women of the Dust went on to win CRE Race in the Media awards. 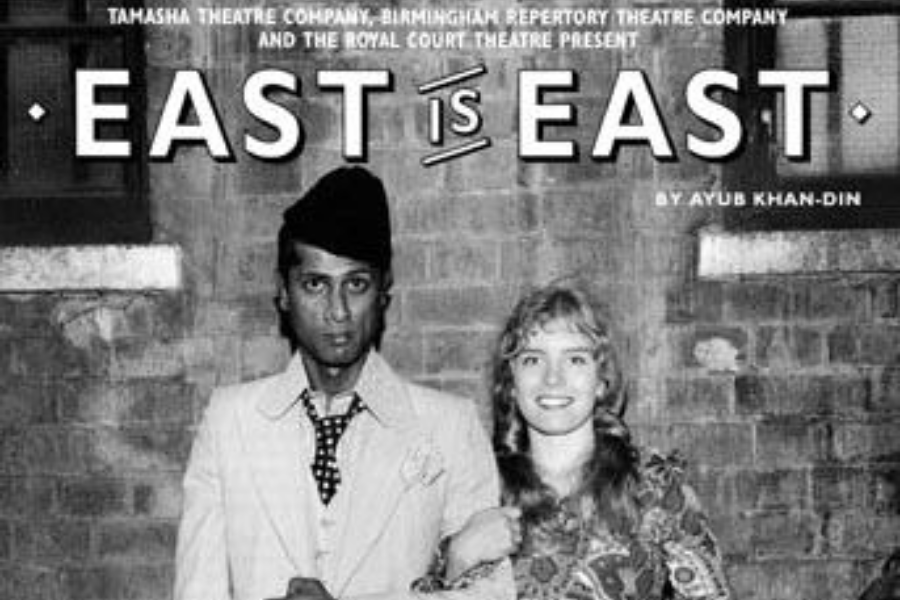 The company was brought to wider attention in 1996 with EAST IS EAST  –  a moving comedy about a mixed-race family growing up in 1970s Salford.  Ayub Khan Din’s play, based on his own childhood, was co-commissioned and developed by Tamasha, Birmingham Rep and the Royal Court, and opened to sell-out audiences and critical acclaim.  After two London runs and a national tour, the production transferred to the West End, receiving an Olivier nomination, while Ayub collected John Whiting and Writers’ Guild awards.  The subsequent film became one of the UK’s most successful, making stars out of original cast members Jimi Mistry and Chris Bisson.

In 1997, Tamasha was invited to premiere A TAINTED DAWN at the Edinburgh International Festival.  Marking 50 years since partition in India, this play featured an original score by Nitin Sawhney and the then unknown Parminder Nagra among its cast. 1998’s Bollywood homage FOURTEEN SONGS, TWO WEDDINGS AND A FUNERAL would prove to be another hit with audiences nationally. For Tamasha, it led to two successful remounts and a TMA Barclays Theatre Award for Best New Musical. For Parminder, it led to a lead role in BEND IT LIKE BECKHAM (and eventually ER) after having been spotted in the show by director Gurinder Chadha.

The focus moved closer to home in 1999 as the lives of Birmingham’s restaurateurs became the subject of Tamasha’s next middle scale piece.  “The rising smoke of the kitchen in the unforgettable BALTI KINGS,” wrote columnist Yasmin Alibhai Brown, “disseminated the pain and strength of immigrants better than any over-funded government report.”

Also in 1999, Tamasha began to explore how it could apply its research-based practice in the rehearsal room to develop the teaching of drama in the classroom. TIME: Tamasha Intercultural Millennium Education was a project which worked in schools in London and Birmingham, encouraging teachers to shift attention away from themes of ‘race’ and ‘minority’ in favour of a more confident form of cultural exchange. The findings of the two-year pilot project in schools in London and Birmingham were presented at the TIME Conference in 2001, attended by teachers, educationalists and theatre practitioners nationwide.

Tamasha took over the London venue, Lyric Hammersmith, in 2001 with Fourteen Songs… revived in the Main House for a second time, while new play GHOSTDANCING – Deepak Verma’s transposition of Zola’s THERESE RAQUIN – premiered in the Studio.  That year, The Guardian named Tamasha among the ten most exciting theatre producers in the UK.

Responding to the publication of The Eclipse Report, Tamasha launched Design Direct in 2002, becoming the UK’s first positive action training course for British Asian designers and directors.  Further initiatives for writers and performers followed, under the umbrella of the Developing Artists programme.

The Company’s body of work continued to diversify with 2002’s devised comedy RYMAN AND THE SHEIKH, and the vibrant, dance-based STRICTLY DANDIA the following year, which went on to win a Herald Angel Award at the 2003 Edinburgh International Festival for Liam Steele’s choreography.  That same year, Tamasha’s first film, MIDNIGHT FEAST, premiered at the Raindance Film Festival. 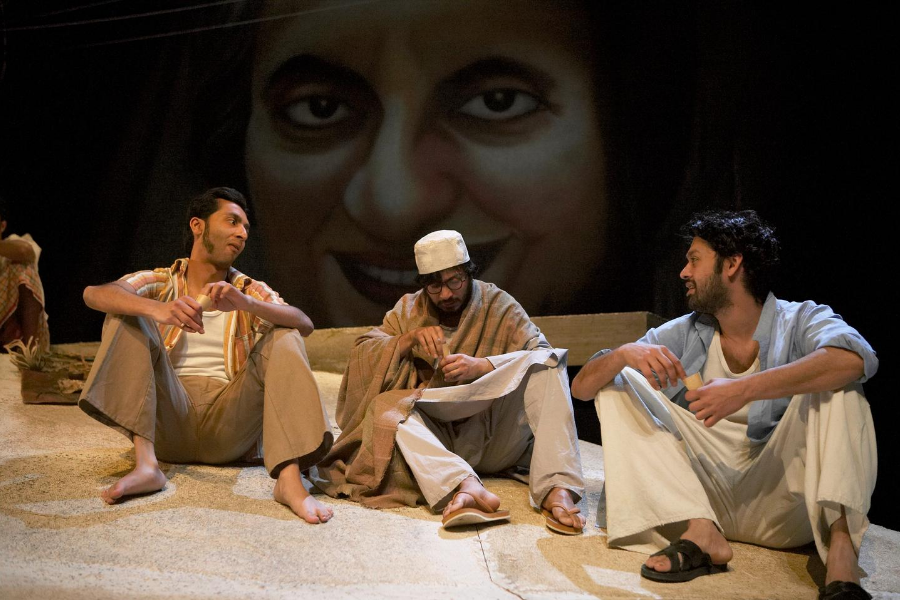 In 2005, Tamasha announced its first ‘season’ of work, with three new productions opening withing the space of seven months: the cult verbatim show, THE TROUBLE WITH ASIAN MEN; an adaptation of Rohinton Mistry’s epic novel A FINE BALANCE, which enjoyed two sell out runs at Hampstead Theatre; and the Company’s first play for young people, CHILD OF THE DIVIDE, which went on to be names as Time Out Magazine’s top kids show of 2006.

In 2008, Tamasha continued its work with secondary schools by turning the verbatim material collected during the TIME project into the youth production LYRICAL MC.  SWEET CIDER, the debut play by Em Hussain, followed in the autumn, becoming Tamasha’s first full production to emerge from its Developing Artists programme.  This was followed in 2009 by the company’s biggest production to date, a Bollywood-inspired musical adaptation of WUTHERING HEIGHTS.

In 2008, Tamasha continued its work with secondary schools by turning the verbatim material collected during the TIME project into the youth production LYRICAL MC.  SWEET CIDER, the debut play by Em Hussain, followed in the autumn, becoming Tamasha’s first full production to emerge from its Developing Artists programme.  This was followed in 2009 by the company’s biggest production to date, a Bollywood-inspired musical adaptation of WUTHERING HEIGHTS. 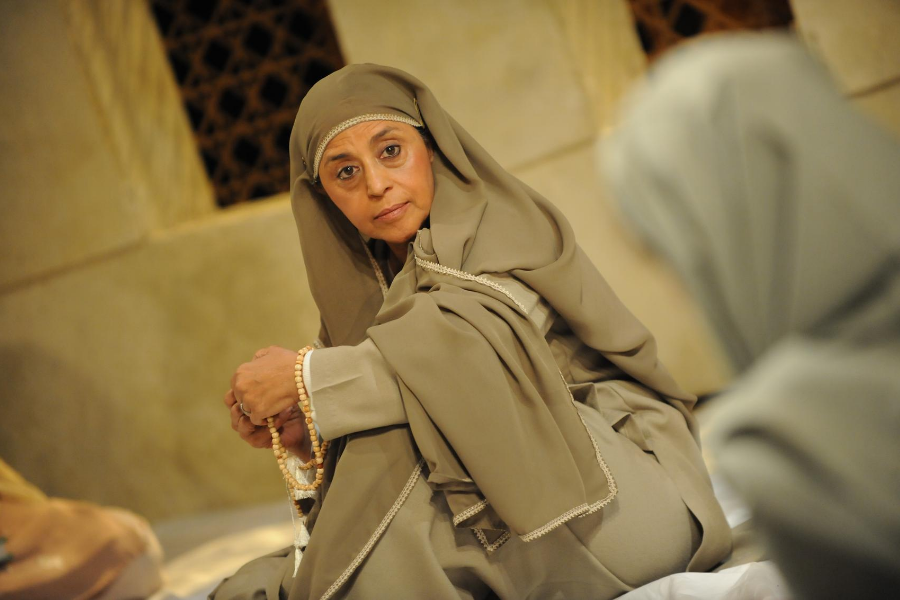 Image link
Ila Arun in THE HOUSE OF BILQUIS BIBI

In 2010, the company celebrated its 21st year with a win for Kristine and Sudha at the inaugural Asian Women of Achievement Awards and a new middle-scale production THE HOUSE OF BILQUIS BIBI, written and directed by Sudha and Kristine respectively and starring singer and Bollywood actress, Ila Arun. 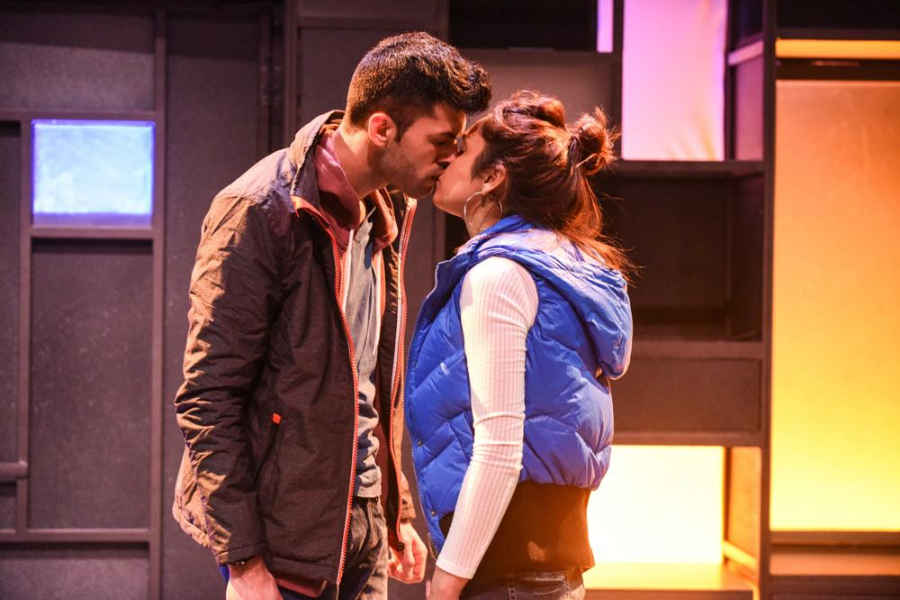 From 2011 energetic new artists continued to emerge with Nimmi Harasgama and her one-woman show AUNTIE NETTA’S HOLIDAY FOR ASYLUM; the soon-to-be legendary writer of SNOOKERED, Ishy Din in 2012, and the brilliant young actors, assistant directors and designers, all graduates of the TDA programme, taking centre stage in shows such as THE ARRIVAL (2013), MY NAME IS… (2014 and 2015) and BLOOD (2015). During this period Kris and Sudha broadened the company’s remit to support artists of colour from all backgrounds, no longer solely South Asian, a response to a changing world, and the increasing demand for the company’s services from a new generation of artists.

Following co-Founder Kristine Landon-Smiths’s appointment as Lecturer in Acting at NIDA in Sydney playwright and producer Fin Kennedy joined Sudha as co-Artistic Director in November 2013, having served as Associate Artist from 2010-11 and leading on the company’s flagship Playwrights-in-Schools scheme Schoolwrights. Sudha stepped down to continue her creative journey in Spring 2015 and Fin has been sole artistic director of the company since then, introducing a raft of new projects including site-specific community project TAXI TALES (adapted for BBC2 in 2018), young people’s projects RE-FUEL, BARBICAN BOX, HALF OF ME, and MIGRATION STORIES, a collaboration with the Migration Museum. In 2014 Fin set up in-house writers’ group Tamasha Playwrights, which has launched numerous careers including Iman Qureshi, Rabiah Hussain, Ross Willis, Amy Ng, Guleraana Mir, Danusia Samal, Sami Ibrahim and Nyla Levy.

The company’s 2017 production, MADE IN INDIA by Satinder Chohan won Best Production at Eastern Eye’s ACTA awards. In the same year Tamasha created its first audio dramas, LOYALTY AND DISSENT, about the experiences of Indian soldiers during World War One, a commission for The National Archives’ outreach department.

The company’s 2017 production, MADE IN INDIA by Satinder Chohan won Best Production at Eastern Eye’s ACTA awards. In the same year Tamasha created its first audio dramas, LOYALTY AND DISSENT, about the experiences of Indian soldiers during World War One, a commission for The National Archives’ outreach department.

Tamasha’s Developing Artists Programme has grown into the main creative engine room of the company, with a year-round programme of professional development and showcase opportunities for emerging artists of colour, many of whom go on to work with us professionally. The membership stands at over 2,000 and is behind many of the company’s multi-artist initiatives such as HEAR ME NOW, Associate Companies and Bitesize Playwrighting for schools.

Tamasha continues to lead the diversification of the British theatre industry, and in 2017 was awarded a major Arts Council grant from strategic fund Sustained Theatre, to found and lead IGNITE, a nationwide consortium of venues working together to train a new generation of Associate Producers. The project led to four new productions; UNDER THE UMBRELLA (Belgrade Theatre, 2019), WHAT FATIMA DID (Derby Theatre, 2019), AIN’T MISBEHAVIN’ (Mercury Theatre, 2019) and GLORY (Dukes Lancaster, 2019) and launched the full-time producing careers of all the trainee producers who took part. 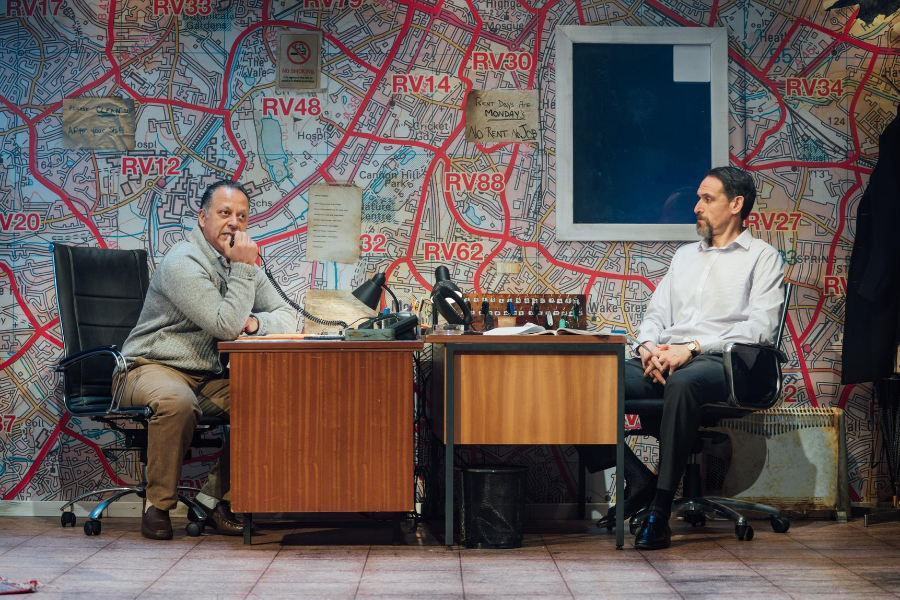 2019 was the company’s busiest year to date and also included APPROACHING EMPTY, Ishy Din’s second play for the company; DOES MY BOMB LOOK BIG IN THIS? by Nyla Levy, and I WANNA BE YOURS, a co-production with Paines Plough and the debut play from slam poet champion Zia Ahmed. 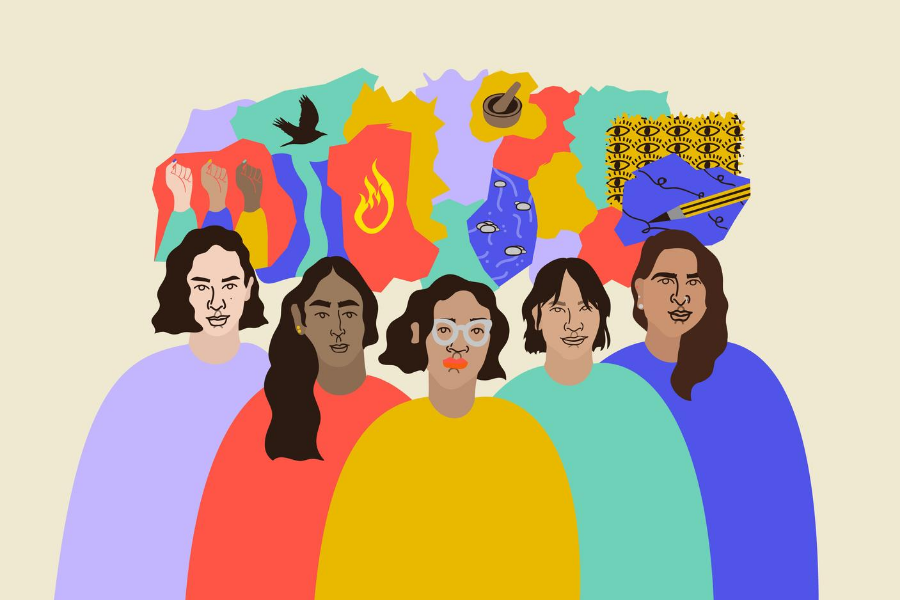 Tamasha’s most recent initiative is Tamasha Digital, which has produced projects such as DECOLONISING HISTORY, a series of audio dramas for SOAS University of London, arts and culture podcast TELL DEM, and interactive smartphone walking adventure WE ARE SHADOWS: BRICK LANE, a joint project with Coney.