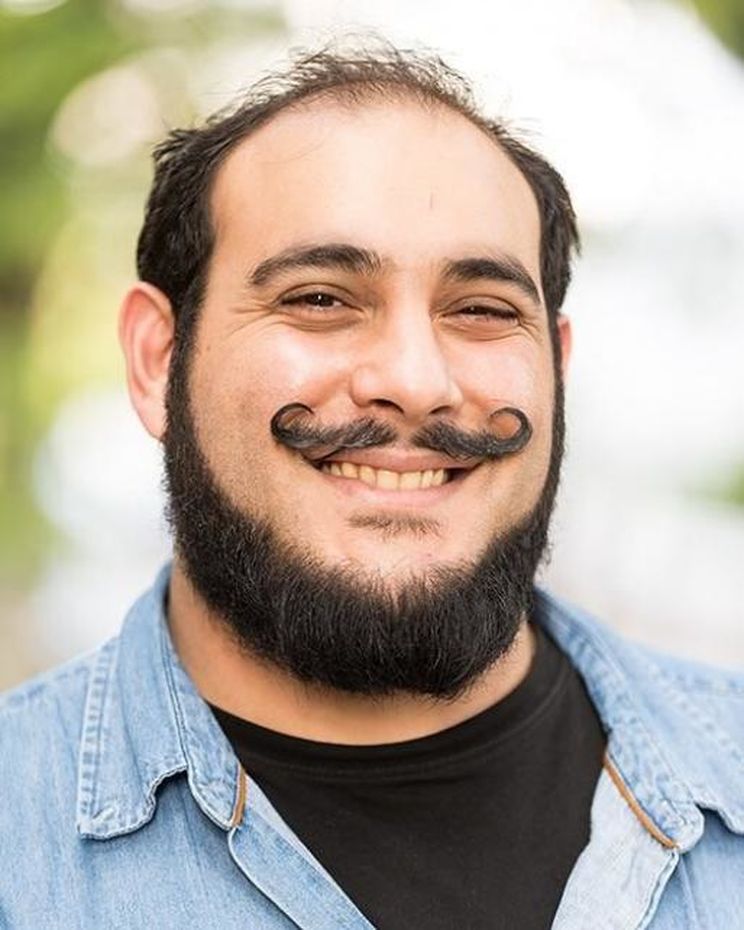 Not our collection of words, but how sound extraordinaire and all-round good egg, Farokh Soltani, would describe himself. And you’re just in luck, as, fresh from having worked his magic on upcoming audio drama, UNDER THE MASK, Farokh has put together some of the trax that inspired him throughout the years. Enjoy.

Saviour by The Dears

I put this song on as soon as I first finished reading the script for UNDER THE MASK, and thought to myself: “this is what it will sound like”. The resigned and mournful tone, the meditative echoing beat that stays with you for the entire time, and the upbuilding orchestration, sparse in the beginning and the end, and full of adventure in the middle – they all mirror the sonic structure of the play and the journey of Jaskaran.

This track always takes me back to my teenage years in turn-of-the-millennium Tehran, which was going through a cultural spring thanks to a newly-elected reformist government. Any musical release still needed government approval, and the Ministry of Culture and Guidance didn’t approve of rock music – 4/4 drumbeats were considered to be the boundary separating pure Iranian culture from the destructive influence of the West. O-Hum tried to get around this by singing sonnets from Iran’s national poet, Hafez, over their brand of alt-rock. Even though it didn’t get them a licence in the end, it did teach teenage me that cultures can and will meet.

Ben Franklin’s Song by The Decemberists

Why yes, I am a white American hipster on the inside, how did you know? Case in point, out of all the musical numbers in and around Hamilton, my favourite – and most-played track of 2018 – is the one sung by a banjo-playing folk band from Portland, Oregon. I can’t get enough of the juxtaposition of Lin-Manuel Miranda’s founding father braggadocio and the 2/2 beat of the drums. Whenever I want to inject a bit of confidence into my day, I go to the park and sing the chorus of ‘Do you know who the f*** I am’ out loud to the squirrels – it never fails (even though they probably still don’t know who I am).

One voice, one harp, and a whole universe of calm. This is the song that always centres me, and occasionally makes me cry. The piano notes at the end of Under the Mask were directly influenced by this.

Another Iranian rock band who didn’t get a licence to release their music, 127 drew their inspiration from the vulgar musical numbers of the Iranian vaudeville and music hall traditions. The 6/8 rhythm and the staccato nonsensical lyrics come directly from the smoke-filled 1930s belly-dancing cabarets of Tehran, and take me back home whenever I feel homesick. Here’s my claim to fame: I was actually in university with the members of 127, and the lead singer once asked me for a light and forgot to return it, but I was so starstruck that I never mentioned it. UNTIL NOW.

This is the track that finally helped me figure out the sound design of the recurring nightmarish intrusive thoughts that Jaskaran, the protagonist in Under the Mask, has at night. It throws together a lot of repeated musical phrases, and then builds up a variety of intensities from them. The track is actually from Sun Ra’s amazing religious philosophical anti-racist Afrofuturist musical film, Space is the Place, in which he travels in space and time in a giant pyramid-shaped ark and fights NASA space racists using free-form jazz. Yes, it is as good as that sounds.

I can divide my understanding of music into two periods, before and after this song. It’s from the Joe’s Garage album, which is a comedy rock opera about a world in which music is banned (see the connection?) – but ignore the narrative monologue of the first minute and you’ll hear, hands down, the best guitar solo ever played. It wails, it sings, it sighs, it speaks. I simply didn’t know or believe that music could do that.

And this is my most played track of 2020 – I wonder why… This is one of those tracks that make you dance with darkness, to acknowledge how terrible things are and still feel some sort of joy. Listen do it and I promise you, not only will you want to clap along, but you’ll also know exactly when, by instinct.

Twenty Tons of TNT by Flanders and Swann

I’ve heard countless protests songs, about everything from the destruction of the planet to global racism, and from capitalist hegemony to a lack of human curiosity regarding the vocal habits of foxes. And yet, this is the only one that has ever brought tears to my eyes – even though it’s by a 1950s comedy duo most famous for their novelty songs. Hands down, my favourite song of all time. I’m not ashamed.

Trax that inspire them: Debo Adebayo