Ishy Din: My motivation wasn’t to become a writer 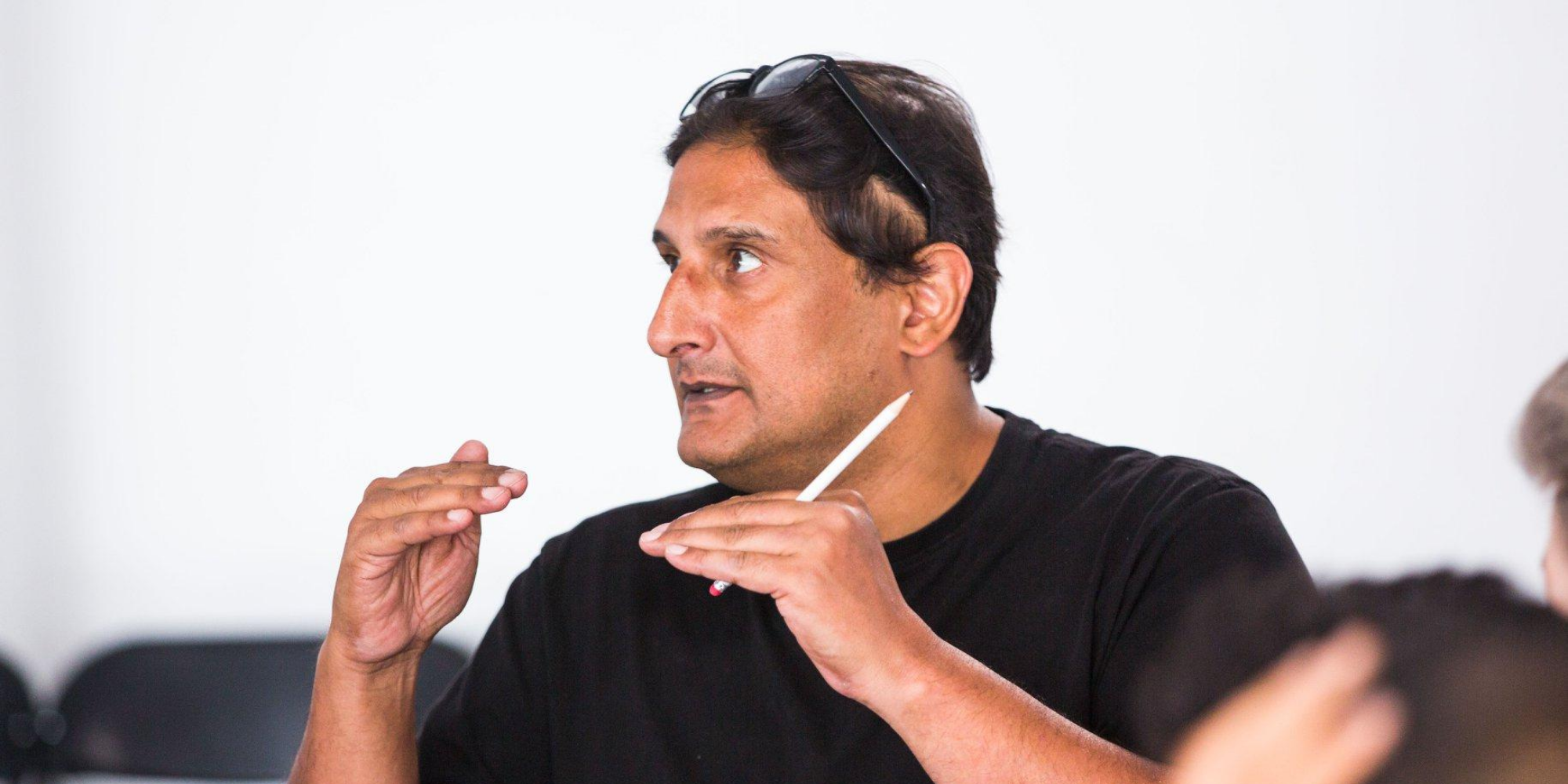 Ahead of the upcoming web stream of his 2019 gritty play, we sat down (virtually) with the writer of APPROACHING EMPTY, the very lovely Ishy Din, and asked him a few questions. Grab a cuppa and read on!

From taxi driver to full-time writer. For those who don’t know, tell us – what sparked that transition?

Serendipity. Plus our first family computer and my resentment of it not being used enough! I’ll explain.

When I was driving taxis, there was just this belief that writing was what other people did and that actually, brown guys with my background from Middlesbrough, don’t become writers. I had just bought my daughter a computer – the first computer we had in the house. The girls were quite young at the time, they’d use it for a bit when they came home from school, then they’d eat, have a bath and go to bed. And I remember just resenting the fact that I’d spent all this money for this thing that just sat in the corner and hardly ever got used.

So, I was cabbing one night and I heard an advert on Radio Five Live saying they were looking for short scripts with a sporting theme. And I thought, I’ll use this new-fangled machine I’ve spent all this money on to enter this competition. My motivation wasn’t to become a writer, my motivation was to do something with this computer. So, I wrote this short radio drama about two young Pakistani kids who go and watch ‘Boro play for the first time and sent it off to the BBC thinking somebody’s going to read this and think what a git, but they liked it and they made it and that’s really where my journey began.

If that first effort hadn’t broken through, it would have just confirmed my original thoughts all along – that people from Middlesbrough, especially brown people from Middlesbrough, don’t become writers. That’s why I use the phrase serendipitous – a few things went in my favour – the computer, the resentment of it not being used enough, this advert that came in a timely fashion and then being shortlisted and having my stuff made. There were a few things that worked in conjunction for me to believe that, maybe I can do this.

You’ve written about topics that are pretty hard-hitting, have you had any negative reactions to anything you’ve written, and how have you dealt with this?

I haven’t really experienced much controversy around my subject matter, because it’s my truth. The plays that I’ve written about have either been meticulously researched (I’ve written about Indian soldiers in the First World War) or come from a lived experience, so it’s very difficult for someone to start breaking down that lived experience and say, well, I don’t think it’s like that, because it is like that and that’s the life I’ve lived and those are the experiences I’ve gained over time.

I have had my work critiqued though, of course. Being a playwright is incredibly exposing, so when everybody doesn’t say nice things all of the time, it does affect you on a really deep, personal and visceral level. 99 people might say this is fantastic, but as a writer you’ll latch onto the one person who thinks, oh well, it’s not all that. Speaking to other writers, that seems to be true across the industry – we focus in on the negatives as opposed to all the positives.

APPROACHING EMPTY is set in the aftermath of Margaret Thatcher’s death and touches up on her legacy as PM. Any parallels to today’s times, especially with what’s happening right now to local economies and businesses, following Coronavirus?

Of course! What we saw with Margaret Thatcher and also with Reagan in America was the beginnings of neoliberalism, and that’s why today we have found ourselves following down that path again and why we’re now in a position where profits have come ahead of people. We now as a society believe that’s fair game. It can all be traced back to that period – whether it’s Brexit, whether it’s the handling of the pandemic, whether it’s the decisions Governments and people who govern us are making now, you can trace a line back to when that switch occurred to a new economic model – the neoliberal one – which really does put money before people, in my humble opinion.

“The people who aren’t benefitting from these policies are the very ones who are so convinced that those implementing said policies are on their side. And that’s really sad and quite frightening.”

“The people who aren’t benefitting from these policies are the very ones who are so convinced that those implementing said policies are on their side. And that’s really sad and quite frightening.”

You’ve worked as a writer in many different capacities, are there any particular projects/jobs that have made a lasting impression on you?

They all have in some way.

I loved writing my play about the First World War, because I learnt so much about our history and the contribution the territories of the Empire and of the role they played in Britain winning both World Wars – whether that was through men and arms or whether it was through hard cash. We made a massive contribution in both of those World Wars, which is criminally not talked about on the school curriculum.

Currently I’m under commission from the RSC for a new play about the Mughals and I find it fascinating – gaining knowledge and understanding about that world and that period.

I always like my TV gigs as well, because again, you get to go into and find out about new worlds and issues that perhaps you wouldn’t have under other circumstances. So just that idea of the research and the knowledge that you procure to be able to tell and present that story with an accurate eye… I always love doing that.

“You come at it from a different place – you’re confined to this stage and it’s happening live and it’s much more dialogue-led and you’re interrogating the human condition much more with the benefit of words rather than pictures like TV.”

“You come at it from a different place – you’re confined to this stage and it’s happening live and it’s much more dialogue-led and you’re interrogating the human condition much more with the benefit of words rather than pictures like TV.”

Does your approach to writing change depending on the form?

Yes, it needs to necessarily, because although the overall task is to write, each medium – whether that’s film, TV, theatre or radio – has a different methodology and there are different requirements.

For film and TV which are visual mediums, you’re telling a story with pictures rather than dialogue, so the method and process of creating that necessarily has to be different. For radio, there is no visual so you have to think about sound and tell the story via sound, whether that’s SFX or how you use dialogue. And again, theatre is a confined space and happening live… I once read something that’s quite pertinent… that in TV and film if there’s a smoking gun, the story’s about who fired the gun, but in theatre if there’s a smoking gun you ask, well why did they fire it? You come at it from a different place – you’re confined to this stage and it’s happening live and it’s much more dialogue-led and you’re interrogating the human condition much more with the benefit of words rather than pictures like TV.

Do you have a preferred medium?

What advice would you give to an emerging/early career writer?

Over the years, I’ve been asked this question a few times and there are a couple of answers, but I’ve come to the conclusion that the most important thing is resilience and stamina. You’ve got to be able to stick around long enough for people to start trusting you and giving you gigs.

You’ve got to develop the ability to brush yourself down and start again, because you’re going to face a lot of rejection. It’s going to take a long long time for you to be able to get yourself into positions where you feel that your writing can support you, and that you’re getting the due opportunity that should be coming your way for the effort and work you’ve put in to get to that point.

And then the other thing is write – practice. If you wanted to be a chef, you wouldn’t stop cooking and think, well I’ve learnt everything there is to know about cooking. So likewise, practice, write wherever you can and whenever you can, because it will all pay dividends.

Approaching Empty: web stream is available to view on our Facebook and YouTube channels from 7.30PM 21 July until 7.30PM 4 August. Presented by Tamasha, Kiln Theatre and Live Theatre.

Q&A with Ragevan Vasan (I WANNA BE YOURS)