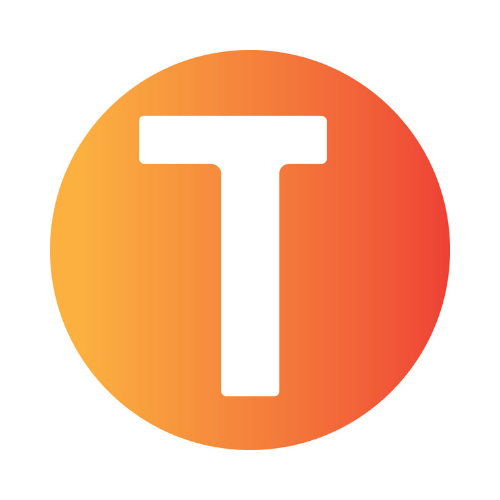 Running any longstanding theatre company is like being a custodian of one of the great ships of British theatre. They all differ in size, vision and direction. But there’s always a sense of being entrusted with something precious, not least the large community and long history which comes with any established organisation.

Tamasha celebrates its 30th anniversary this year. We had some celebrations planned, until a certain virus upended 2020 and everything in it… But one part of this landmark year has continued behind the scenes – the company’s re-brand, complete with new logo and new website, which we’re excited to unveil today.

When I took over Tamasha 7 years ago, I think it’s fair to say the company’s identity was somewhat in flux. Its pioneering co-founders Sudha Bhuchar and Kristine Landon-Smith had stepped down after 23 years, and left some big boots to fill and a brimming back catalogue of hit shows and careers launched. Taking the best of that legacy forward, while articulating the company’s future, took a long time, and was a responsibility both I and the Tamasha team felt the weight of every day.

Tamasha’s 30 years falls neatly into three decades, each with their own character. 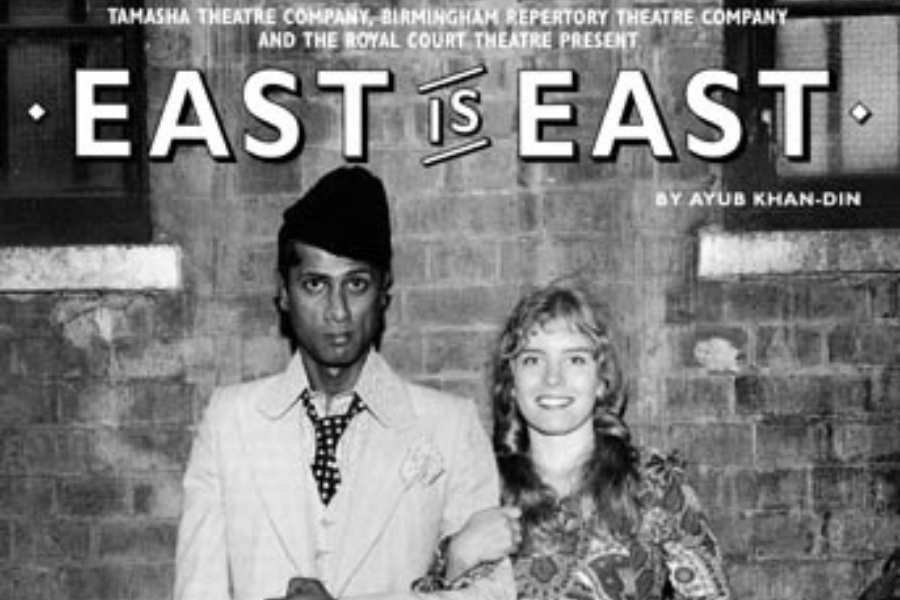 For its first ten years, 1990-2000, the company had been very much associated with championing British Asian talent, and getting stories from South Asian diasporas onto Britain’s main stages. At this, Tamasha was extraordinarily successful, with sell-out main stage shows at Riverside Studios, Lyric Hammersmith, Birmingham Rep and Hampstead Theatre (among many others) proving there was an audience for this work. 1996’s breakthrough play EAST IS EAST put the company on the map, but there were many others. Tamasha’s back catalogue puts the ‘story’ into UK South Asian history, charting a generation’s experiences of migration, adversity, survival and success. That first decade of work drove much of the crossover of British Asian culture into the mainstream which took place in 1990s, and made household names of Parminder Nagra, Jimi Mistry, Nina Wadia, Ayub Khan-Din, Raza Jaffrey and many others. 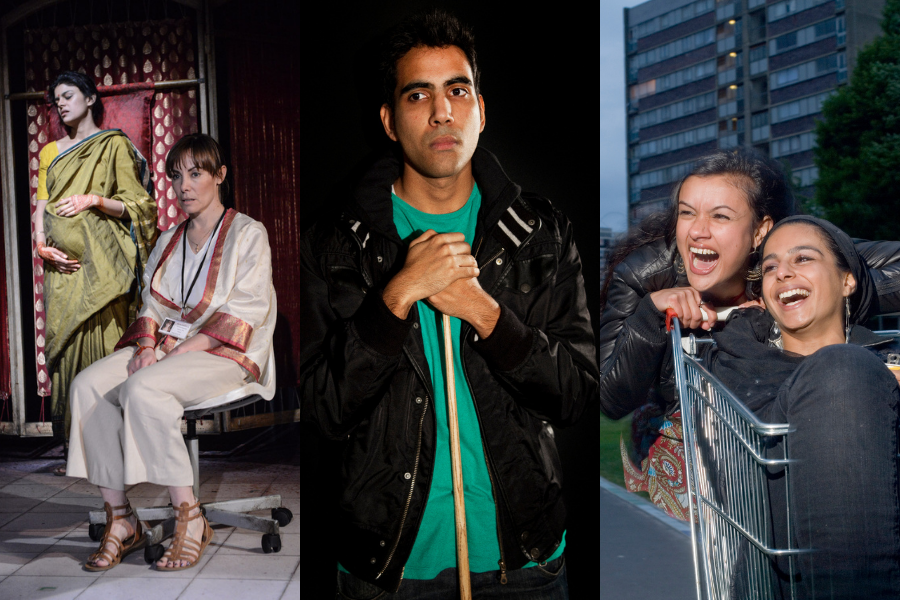 Tamasha’s second decade 2000-2010, saw the founding of Tamasha Developing Artists, and with it a new generation coming through – with a particular focus on writers of gritty new dramas set in the present day. Satinder Chohan, Ishy Din and Emteaz Hussain can all trace their roots back to this period. It also saw a renewed interest in the company working in schools, something I was part of when I set up what, for a while, was the company’s flagship education programme, Schoolwrights.

In 2010, while I was Associate Artist, Tamasha’s co-founders changed the mission statement, no longer exclusively championing British Asian talent and stories, but open to creating new work with a whole new generation of artists of colour, whose identities were fluid, and multiple, but always with an emphasis on the marginalised, unheard, or misunderstood.

Tamasha’s old logo – a thumb print in vermilion – was a much-loved mark of arrival, and defiance. It served the company well for a long time. It was very much about our founders causing a ‘commotion’ in British theatre and leaving their mark. Over the years, it’s occasionally been mistaken for a bindi, or tilaka (neither of which it is). But more importantly, as time went by it became clear it’s a logo from a pre-digital age – it isn’t always clear what it is when it’s reduced down on social media.

In starting to think about what could replace it, we had to take in the full breadth of the company’s work which emerged during its third and most recent decade. No longer just a touring theatre company, or training provider, we had by then diversified into a year-round roster of scratch nights, workshops, schools residencies, mini tours, community projects, youth theatre shows, audio dramas, walking tours, podcasts, associate companies, and training for playwrights, directors, producers and even novelists.

The question we had to answer was: what runs through and unites all these strands?

To start to answer this, we held a round of consultations via an open online questionnaire. The responses were illuminating. In answer to the question ‘If you were to describe the value of Tamasha to a friend, what would you say?’ people wrote passionately about our impact:

“Tamasha champions the case for diversity in the arts through both its practice and its work, supporting the voices far too often neglected in the industry as a whole. Many theatre companies will make these claims but few have the expertise and leadership that Tamasha continually reaffirms.”

“It has been the foundation of so many well known artists and an unsung hero of the cultural fabric of the UK.”

While others simply wrote:

“Come and be entertained”.

(We all liked this – because despite Tamasha’s seriousness of purpose, one thing we also pride ourselves on is providing a good night out.)

We worked with two different branding agencies to help us facilitate this conversation. At one workshop, involving every staff member and several board members, we were asked to bring in an object which represents Tamasha. There were some lovely responses: a key – to open doors; a coriander plant – endlessly adaptable, whose history and culinary use spans Asia, Africa and Europe; a turmeric root – a riot of colour, whose stains are hard to get out.

My favourite was from the chair of our board, the wonderful Deepa Patel, to whom this company owes so much. Deepa brought in a broken bowl, which she had repaired herself with gold, a craft called Kintsugi. Its philosophy is that breakage and repair are considered part of a history of the object, to be celebrated rather than concealed, adding to its character and identity.

It’s this idea which inspired a poem in Tamasha’s honour, which I’ve written specially to mark her landmark 30th birthday, and shared below for the first time.

It seemed to me that, more than anything, the company represents triumph in adversity, finding meaning through suffering, saying that despite everything, we are here, and we will be heard.

Tamasha owes a huge debt of gratitude to our Marketing Manager Rema Chandran, who has so patiently and tirelessly led on this long and detailed process. It’s also Rema who so brilliantly summed up our vision in the succinct new line:

“To shape our world through its stories”.

Tamasha has always believed that stories can change the world. It’s that power which leads to our other most fervent belief – that it matters who a nation’s storytellers are.

As Covid-19 continues to upend the theatre industry, and indeed the world, Tamasha’s next 30 years may look very different. Small scale live theatre, in the way that we are all used to it, may or may not survive. But the human urge to tell, hear and find meaning in stories isn’t going anywhere. That’s what Tamasha is – a stable of storytellers, charting the past, imagining the future, and documenting truth. Because that’s how to change the world, one heart at a time.

A new logo can never capture all of this, of course. In a way, the one we have gone for acknowledges this, by not trying to find a replacement symbol for the thumb print. Instead, we’ve chosen to foreground the text of the company name, and with it the power of the written word.

The job our designers have done plays tricks on the eye with angles, and length. It suggests movement, change, and a subtle shifting of perceptions. If you look at it for long enough, it even seems almost to shape-shift before your eyes… The colours suggest a nurturing warmth; its bold, clear lines a confidence in what we do.

I hope this captures Tamasha’s unique power, using our art to change how we see, and with it, how we think. Because it’s only by seeing one another that empathy and compassion can truly flow. As we rebuild our broken country, post-austerity, post-Brexit, post-Covid and (happily now) post-Trump – we need this emotional intelligence more than ever before.

Happy birthday, Tamasha. I hope we have done you proud. 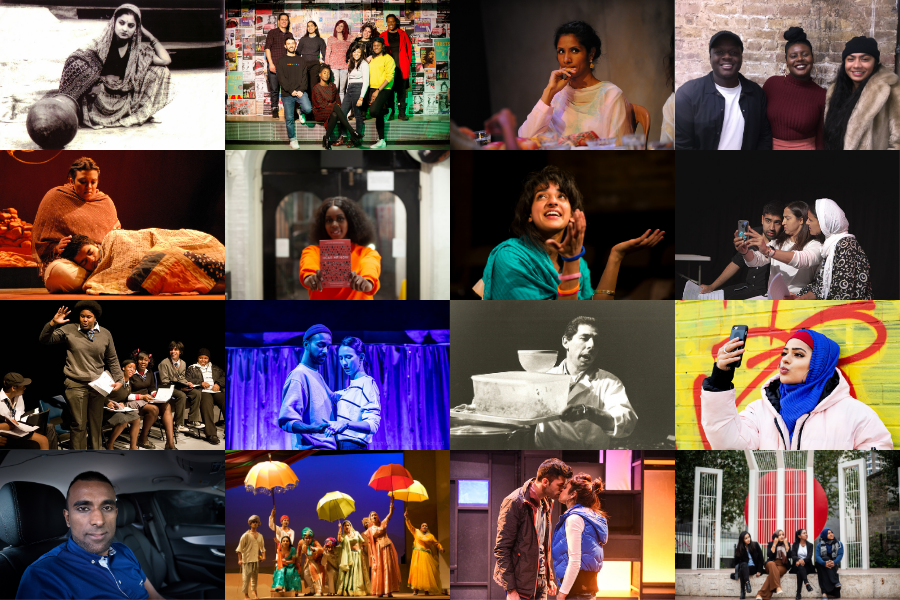 It’s all about The Love. This is The Work.
From friendship forged in fury, embers flew.
Injustice fanned the flames; new stories stirred,
And people came to warm themselves on truth.

As numbers swelled, the crowd began to sing;
A song of futures, wrought from troubles past,
Each heart instilled with Hope’s eternal spring;
As voices soared, the stories lit their path.

Today our congregation numbers thousands,
United by creation and compassion.
We sing the same song written by our founders;
That from the wreckage, beauty can be fashioned.

Tamasha is the place where England sings.
Another country, waiting in the wings.