Under The Mask with Sita Thomas and Farokh Soltani 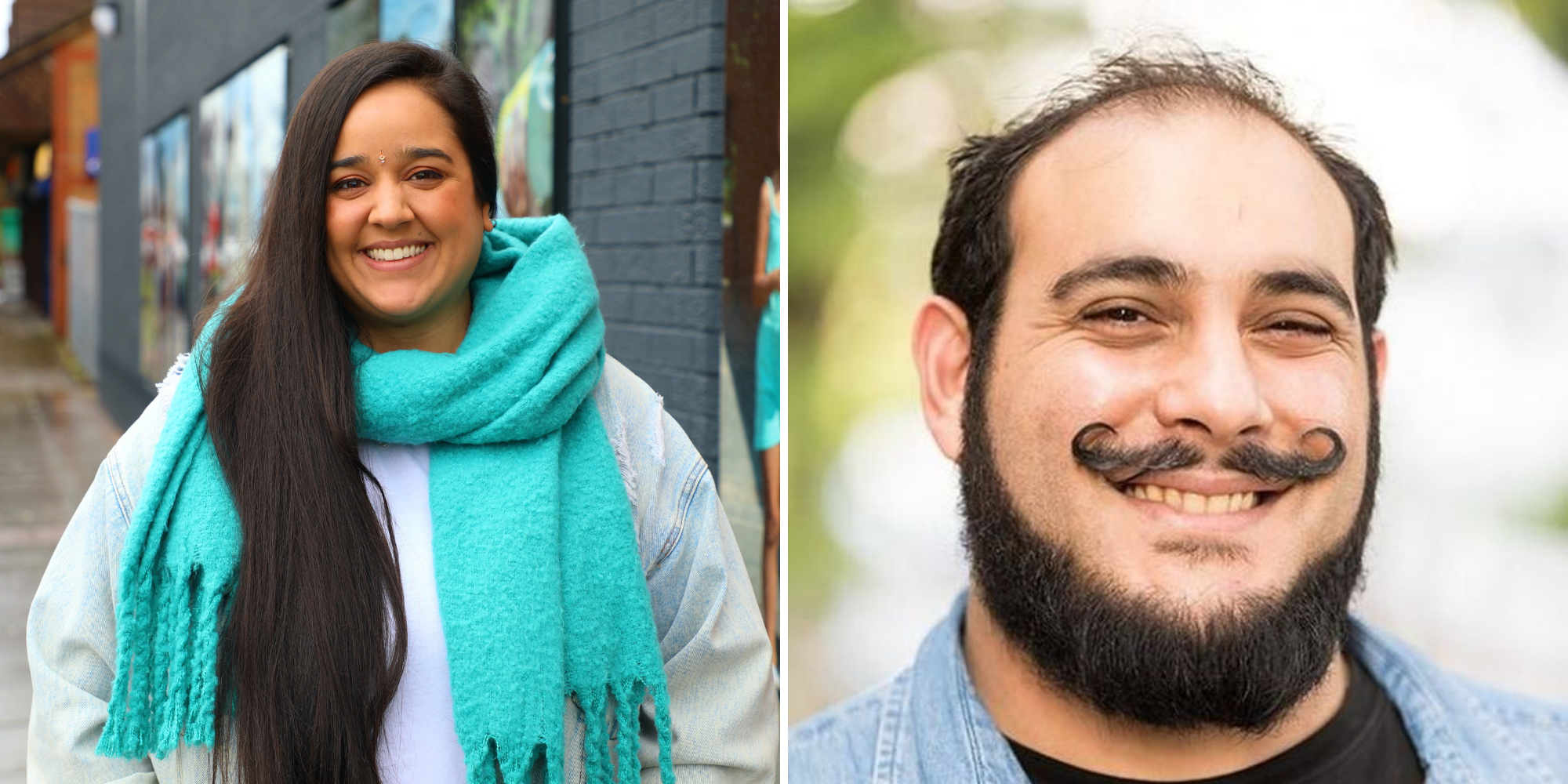 As UNDER THE MASK embarks on the next leg of its tour (we’re heading to Theatr Clwyd, this Wednesday), we caught up with the director and sound designer on the show, Sita Thomas and Farokh Soltani, respectively. Here they are, shedding some light on directing and recording a new piece during a pandemic and unmasking the secret behind binaural sound…

How did you approach your contributions to the piece regarding such a sensitive, current matter and how were your approaches influenced by the media and public’s reaction?

SITA: As well as being a brilliant writer, Shaan is a junior doctor and worked in a Covid Intensive Care Unit. The most important thing to me, which guided my approach to directing the piece, was to honour Shaan’s intentions for the piece, and her experiences. The piece fictionalises her experiences, and she actually took a microphone through the ward capturing real sounds that are unimaginable for so many of us. It felt important to document and honour NHS staff and the acts of sacrifice they’ve been making for all of us, for humanity. Shaan was generous, meeting with me to discuss the characters, the key themes, philosophy, politics, as well as the practicalities of working on a Covid ward through the height of the pandemic. I ensured that all of this fuelled my work with the actors in the recording studio, ultimately we just had to honour the power of what Shaan had written.

FAROKH: Part of the beauty of this piece, for me, was that while it reflects an urgent situation that every single person I know in this world has been affected by, at its heart it’s a very personal and individual story, heard through the ears of someone who was actually there. So I really just trusted Shaan’s experience and followed the perspective, rather than thinking about media representation or public perception. Rather than thinking how this play might represent the entirety of the pandemic, I just tried to listen to it through the ears of an exhausted and spent young doctor.

How did Sennheiser get involved with the project and have they contributed creatively to the production?

FAROKH: The traditional technique for creating immersive binaural sound is to put two microphones either inside someone’s ears, or inside a replica of a head with ears, and record what they pick up. This creates realistic sound perspectives that completely immerses you in an environment, but it also means that it’s very difficult to layer different environments together – which is something we had to do because we obviously couldn’t take actors into the ICU, or even have all of our actors in the same room! But Sennheiser had an amazing solution: they are a pioneer in Ambisonic technology, and provided us with an Ambisonic microphone, which works like this: four carefully-placed microphones record a room in four different directions, and then a software compares and analyses these four recordings to construct a complete 360-degree model of the sound sphere. Then, another piece of software interprets how someone might hear sounds in this sphere depending on where they are and where they position their head, essentially reconstructing the soundscape. So we used Sennheiser’s microphone to record actors, and then recorded various interior and exterior spaces – including in the closed world of the ICU – and then I sat down and literally directed the listener’s head in those spaces! So the sound that we did create would be impossible without Sennheiser’s technology.

How did you separate the emotion and horror of what was going on in the world to be able to put together the final product?

SITA: In a way, we didn’t need to separate the emotion and horror of what was going on in the world to put this piece together. It’s a piece that documents and is a testament to the NHS heroes, to the people, to the families, to the experiences that all of us were going through. We tried to give a small gesture of creative space and care to the stories and experiences that Shaan shared with us, and to what has been happening globally for humanity.

FAROKH: I didn’t, really! It was useful that when we started work on this project, the worst of it (at the time and in this country, at least) had already passed somewhat. But what there was of it, I actually tried to channel into the process – finding ways of elevating the tension in the sound until it matched the tension I felt. In a way, working on this was also a bit therapeutic, in that as Jaskaran found a bit of piece in her life, I also had to find some comfort in knowing people like her exist. I had a moment of clarity when I was coming up with the music for the credits. I was playing around on the piano and suddenly noticed that the dreaded, grating alarm that Jaskaran hears a lot in the ICU, and that gradually gets louder and more frequent as the play rolls on, is actually just a C major chord, that I could turn into a bit of calming music. And I suppose that’s what both Jaskaran and I learned – to find a bit of respite, a bit of calm, in the emotion and horror…

“In a way, working on this was also a bit therapeutic, in that as Jaskaran found a bit of peace in her life, I also had to find some comfort in knowing people like her exist.” Farokh

“In a way, working on this was also a bit therapeutic, in that as Jaskaran found a bit of peace in her life, I also had to find some comfort in knowing people like her exist.” Farokh

Is there a difference in directing and sound designing for a socially distanced performance compared to a standard live performance?

SITA: I walked into Oxford Playhouse where we carried out technical rehearsals for the piece and it was a moving moment, to step into a theatre for the first time in over a year. These are spaces that we love so much and haven’t been able to be in, creating, connecting, and storytelling. I really enjoyed working with Ash our lighting designer to create a subtle and deft lighting environment, that gives a theatrical elevation and purpose to the listening experience. It feels really special to be able to come together to listen to the piece as part of an audience, in comparison to the listening done at home or in isolation. I really hope that people will enjoy a sense of intimacy and delicate transformation of space in how we’ve created this socially distanced piece.

FAROKH: Absolutely. When I think about sound in the theatre, I always think in terms of a communal soundscape in which bodies get immerse and cohere. Conversely, with audio drama, my efforts are directed at accessing the individual listener – engaging them with rhythm, spatialisation, volume, and so on to grab on to their attention and to resonate with them. With a socially-distanced performance, particularly an audio installation, one has to balance both of these aims. I have to be aware of the individual’s responses, but also to the fact that there may be collective reactions and points of attention. The space that the work appears in is something pretty new! 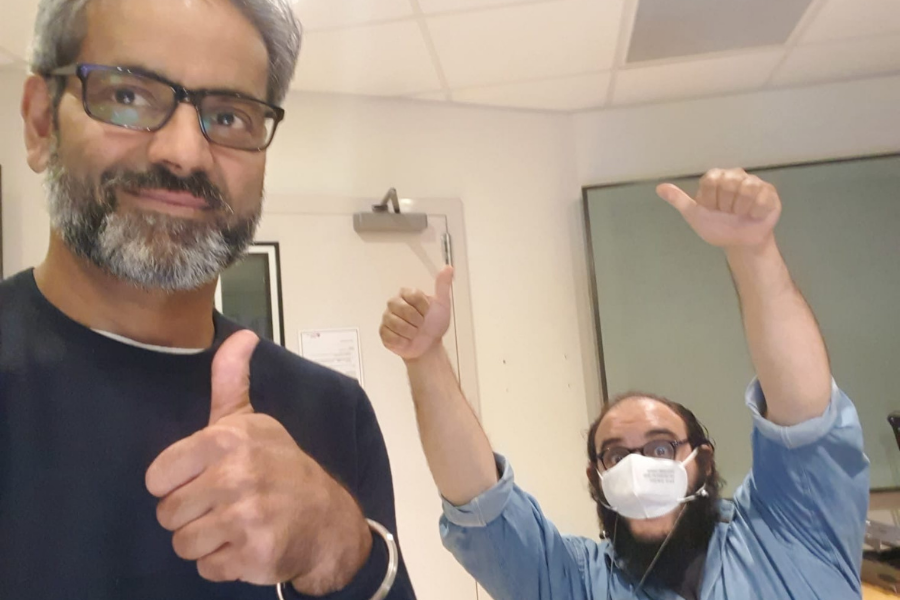 Amerjit Deu (actor, UNDER THE MASK) with Farokh Soltani

How did working during a national lockdown impact on your creative process?

SITA: It was a privilege to work and create this piece during the lockdown; it was an incredibly difficult period for freelance theatre makers with so much work lost. We were lucky to record at the National Theatre recording studios with a robust Covid safety strategy in place. We had three separate studios connected via perspex windows and microphones in each room. I was in one, with Shaan on my laptop listening in via zoom, Farokh our sound designer in another, and two actors at a time distanced in a third studio. Where there were scenes with more than two people, we fixed the standing marks for the actors, then switched and found new marks to secure the appropriate dynamics with 360 degree binaural sound. It was a creative process like no other, but we used all of the technology available to us to communicate and to create safely.

FAROKH: In the technical process, we had to get used to a lot of new ways of working – most importantly, we were never actually in a room together physically! Even during the recording, the cast, the director, and I mainly communicated from different rooms and behind masks. But strangely enough, the isolation did help me get in the mood of the piece. Because of my reliance on immunosuppressants to function properly (long story!) I actually had to shield from my family during the post-production process, and so mixed most of the piece locked down in isolation. In fact, the sound of the bedroom in which Jaskaran isolates herself is the sound of the room in which I spent most of November 2020, locked away from the rest of the world – so there was some resonance there!